SmartHalo, A Device That Turns Your Bike into a Smart Bike

Montreal is considered one of the top 20 places for cyclists, according to the extremely serious Index of Copenhagenize. And since the study takes into account the weather conditions, it is fair to say that during the few months in which you can leave without so much shelter and feel the wind of Lachine Plateau running through your hair, should be quite fun.  And how to take advantage of something so competitive? How could you not feel apart from all this? SmartHalo, a device designed by Cyclelabs, is placed in the handle of your bicycle serving as GPS, physical assistant, lamp and even alarm. Synced to your cell phone via Bluetooth, SmarHalo turns on when you ride your bike, becoming much more than an intuitive light system. 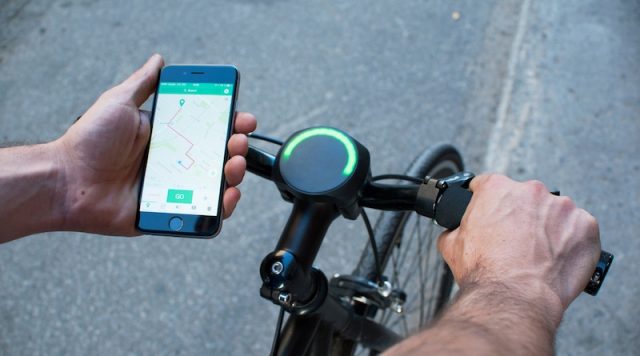 Even in the prototype phase, SmartHalo is looking for funds to be able to become all that it promises. If all goes well, it will be distributed by upcoming year, just after the cold fronts.

Technological innovations in the bicycle world seem endless. More and more companies are designing gadgets to make life easier for cyclists. An example is SmartHalo, a device thought for the city that will turn a normal bicycle into a smart bike.

SmartHalo has been designed and designed primarily for cyclists who move around the big cities. It has many functions. Let’s see what they are.

SmartHalo will guide you through the city

One of the most important functions of this new device is that it works as a gps. We only have to enter the address to which we want to go in our smartphone and SmartHalo will guide us on the fastest and most cyclical route.

You will not lose your bike

For those who are very clueless and do not remember where they left the bike, the application will remind us where we left off.

SmartHalo Can Continuously  monitor your activity

SmartHalo records your progress the moment you start pedaling. We must not give it to the beginning or the end.

In order to improve safety for cyclists, it has integrated a night light with which you will see and be seen. It also has a sensor that detects light in the room and automatically switches on.

Another innovative feature of this device is that notifications can be received when we receive calls, an SMS or an email.

To prevent possible theft of the bicycle, SmartHalo has an alarm installed. It has integrated motion sensors. When motion is detected, a noisy alarm is activated accompanied by lights. When connected to the phone the alarm itself is deactivated when the owner approaches the bicycle with the smartphone.

Price and Launch of SmartHalo