Sony is debuting a powerful smartphone in the mid-range segment in order to get a pie of this lucrative market segment. Sony Xperia XA1 Plus features a similar spec sheet as the other competing devices but boasts a huge price tag of RS. 24,990 which might not go well the consumers.  In a nutshell, the gadget comes with a 5.5 inch Full HD display with a remarkable resolution of 1920 x 1080 pixels along with 4GB RAM, 32 GB internal storage and a powerful Mediatek chipset. Sony Xperia XA1 Plus internal storage can be boosted to a massive 256 GB using a dedicated microSD card slot which happens to be the only point with this device. 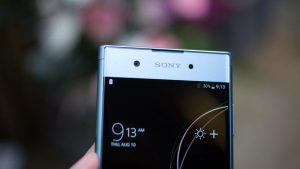 Sony Xperia XA1 Plus Powerful  with specs to compete with

Sony Xperia XA1 Plus is powered by Android 7.0 Nougat right out of the box and this smartphone is expected to get Android Oreo update in upcoming months as well. It comes with an octa-core Media TekHelio 2.0 processor coupled with 3GB RAM and a Mali T880 GPU.The gadget is capable of handling almost everything thrown at it him from the resource hogging apps and games to multitasking and anything else. It is great device for taking photos due to amazing set of cameras which helps capturing moments with great clarity.

The major highlight for Sony Xperia XA1 Plusis its amazing camera setup which boasts of a massive 23 MP rear camera with a large aperture of ½3 inch. It has Exmos RS sensor, LED Flash, hybrid autofocus along with abright F2.0 lens which ensures that the gadget Sony Xperia XA1 Pluswill be able to take stunning photos even in the lowlight conditions with ease and distinction. For the Selfie lovers Sony has thrown in 8 MP with 23 mm wide angle lens on the front camera to ensure users are able to capture quality group selfies on Sony Xperia XA1 Plus.

Sony Xperia XA1 Plus comes with massive battery of 3420 mAh which can easily take care of day’s work without the need of charging. For charging Sony Xperia XA1 Plus has a Qnovo Adaptive fast charging technology in place to offers quick charging support. This smartphone is but chunky and can eel bit bulky in the hands with its 190 grams of weight.

Sony is going through a phase where it is producing remarkable devices but that it translating into massive sales figure. In order to enhance its product portfolio Sony has brought the gadget in the currently lucrative mid-budget segment of the Indian smartphone market but with a little hiked price tag. This device surely deserves the price it quotes due to its rounded, sleek design with narrow border and a high quality build factor which isn’t available in very handset. Hopefully the gadget will help in saving the Sony’s falling fortune.